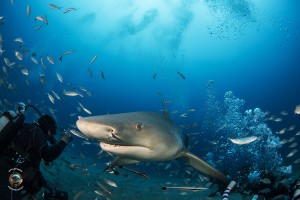 Did you tune in for Shark Week on Discovery channel this year? I did and I must say they leaned more toward sharks being a kinder gentler animal that has been misjudged for a few violent deaths. The stories seemed to be more about shark lovers and their plight to educate the world on the over fished mistreated population. I love sharks but the tree hugging was starting to get to me until I saw one story where Dr. Samuel Gruber from University of Miami was showing the Sharkman how he was able to put a shark into a catatonic state by turning him upside down. Interesting. Sharkman later went to Bahamas and was shown a procedure where the diver "tickled" the shark's nose and put it into a catatonic state. Sharkman was able to take this trick with him and put a large tiger "asleep" somewhere near Africa.

I guess because sharks scare us, we are always interested in a possible Vulcan like sleeper hold that would put a shark down before they ripped your arm off. I thought to myself, I'd like to try this. Good sense and adulthood dismissed the thought. The next day I was diving with a few good friends on the deep ledge near the HOLE IN THE WALL. Angie was to my left and occasionally honked when she spotted something cool like a big turtle or moray. Angie honked and I got curious as to what she might be seeing. She then started squealing. I kicked over, and just up current; I could see a shark lying on the bottom. The current was ripping in the 2 plus knot range so I descended and held on to a rock until I could see the shark was not swimming off. I rock climbed back against the current and observed the shark. It was about 7 feet long, probably a Dusky or Sandbar and was hooked in some kind of a commercial rig. The shark was attached to 600# test white mono that was coupled to a stainless steel cable that was hooked into the reef somewhere up current. The shark couldn't move any further down current so I approached from the rear. I reached up and touched her and she exploded. It took me that long to realize this was a bad idea. By now, 2 other divers had latched on to the bottom near the sight and were wondering what I was going to do to help this poor animal. I was surrounded by do gooders so I remembered everything I learned from last night's show and reached over the shark and began rubbing just under the snout, too close to the teeth. To my surprise, she calmed down. I then switched hands, grabbed her by the dorsal and flipped her onto her back. I kept rubbing the area and slowly made my way to the hook. Yes, the one in her mouth! I noticed the hook was aluminum or some soft metal and would deteriorate over time so I elected to cut the line. As I sawed on the thick mono, the shark just slept. I cut the line and turned her right side up. A quick tug back and forth to help oxygenate her (I learned this on a fishing show) and she swam off. I kept the mono as a token and headed for the surface before the shark came back. I may be dumb enough to try this but I didn't think she would come back to thank me. Back on the boat I felt safe and experienced an unusual high. I was happy. Happy that I wasn't eaten by a ferocious animal and yes I will admit it, happy to be a do gooder and help preserve the Kings of the Ocean, our friends the sharks.