Diving the Hole in the Wall off Jupiter is always an unusual dive. The depth and proximity to the Gulfstream attracts many large pelagic visitors. This day turned stranger when a porcupine puffer fish launched out of a hole and bit my little finger off. Yes, I said puffer fish. Those cute, cuddly, doe –eyed denizens of the deep apparently have quite a temper and a vicious set of teeth.

After leading a group through the cavern called the hole in the wall, we traveled down the wall at a depth of 130'. In my peripheral, I saw an 18” long puffer fish neatly tucked into a lobster looking hole. I stopped the group so everyone could ooh and aah over the pretty fish. I first touched the fish on the head to get him to come out of the hole. Since the area is known to be a regular hangout for Bull sharks, this guy was not budging. Sharks like to eat blowfish. Persistently, I waggled my hand in front of his face acting like food. My hope was to entice him to come out and play. That is when he launched forward and got hold of my pinkie. Playtime over! Man that hurt. This cute little fish has teeth like a parrotfish and the ability to crush shells if necessary. He bit my kevlar gloved hand like a piranha on a dining mission. When he was ready, he let go. I was in pain, but relieved that my glove wasn't cut. When I took my glove off, I realized half of my finger was still in the glove. The stump that extended from my hand was clouding the water with green smoke. It was so thick I couldn't see my hand. I grabbed the base of my finger to attempt to stop the blood cloud and was shocked to see the damage inflicted.

The guffaws at the emergency room were endless. “A puffer fish?” everyone asked. They were unable to reattach the digit due to the crushing effect of the teeth on the glove. I will go to a plastic surgeon next week to get a skin graft or” flap over” as they called it. I am considering having a small Captain Hook style attachment but decided I would probably poke my eye out before I got used to it. With a generous supply of painkillers, I am restricted to shop duties. I am however humiliated by the weak reputation of the attacker.

The other comment I got from divers was” I never knew puffers could bite. I didn't even think they had teeth. “ Yes they can and do. Please be officially advised: Do not mess with the animals; they will defend themselves.

In my thirty years of diving, I am sorry to say I have touched the fishes. I have even captured a puffer to let it blow up for the crowd. I realized several years ago it is not nice to blow up the puffers and all the wildlife should be left to it's natural self. In my time I have swam with sharks on numerous occasions and had Green morays swim into my BC looking for a treat. Just last week I had a Goliath Grouper fight me over a cobia I speared too close to his territory. I never imagined I would have to tell my grandchildren I lost my finger to a puffer. Instead I will tell them I discovered a new species of deep-water puffer fishes. Just like their porcupine cousins, they are cuddly but have teeth half the length of their torso and can bite through a shark in a single lunge. Never let the truth get in the way of a good story. 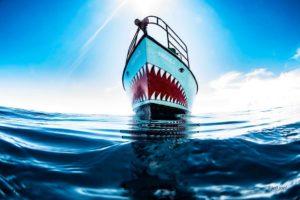